Many of us believe they should fear sharks, lions, and crocodiles. The most dangerous animal in the world, however, is also one of the smallest: the mosquito. Not because of the size of their teeth (the mosquito has not got any), but because of the deadly diseases they transmit. Zika, Malaria, and Yellow fever are all passed on to humans by mosquitos. As a result, more than a million people a year are killed from these diseases. As opposed to sharks, lions, and crocodiles, they are very difficult to run away from. So instead of running, we better get them to dislike us. The solution? Insect proof clothing!

Why are there still mosquito-borne diseases?

First things first. Why are there still so many mosquito-borne diseases in the world? There are several reasons why mankind has not been able to eradicate them just yet. Malaria, for example, comes in four different species that all respond to medicines in their own way. And as Malaria infected people do not automatically develop immunity. Meaning the disease may hit the same person several times. This has everything to do with the fact that mosquito-borne diseases tend to evolve over time. Therefore, vaccination is often ineffective, as it fights the wrong ‘version’ of the disease. In the case of yellow fever, vaccination is effective but only protects us for ten years. So, no matter how you put it; mosquito-borne diseases are an eternal headache.

Would vaccination do the trick?

At the bottom of this page, you can find a simple guide to permethrin regulations and an essential overview of what you need to know!

As long as mosquito-borne diseases keep on claiming victims, people will search for new remedies. Vaccines and medicines are either not effective or too expensive. In addition, catching every single mosquito that carries Malaria, Zika, Yellow fever, West Nile virus (and so on) is simply impossible. This is why we should search for ways to deter mosquitos long before they get the chance to sting. If we invented insect repellent clothing that would keep the mosquitos away, there would be no disease to cure. Less people would get infected, and less people would die. This would give researchers more time to work on effective vaccines, that could eventually exterminate the mosquito-borne diseases altogether.

The good news is, such a product already exists. In the 1970s, researchers discovered permethrin, a biocide that attacks the nerve system of insects. As they instinctively know it will kill them, insects do not go anywhere near permethrin. It is safe to warm blooded creatures, meaning we can use it to create many different types of insect repellent clothing. Armed forces all around the world, for example, use it on their soldier’s uniforms. The permethrin protects them against mosquitos, but also deters ticks, that cause Lyme disease in many European countries. As it is a biocide, the use of permethrin is strictly regulated by, among others, the European government. So, before you start using it in your textiles, make sure you know the rules. If you do it right, though, permethrin will be the most powerful weapon against mosquito-borne diseases you have ever had.

Do you want to know more about insect repellent clothing and its biocide? Download our new white paper “Itchy questions about permethrin regulation- an essential overview” for free or visit our Insect Proof page to discover more! 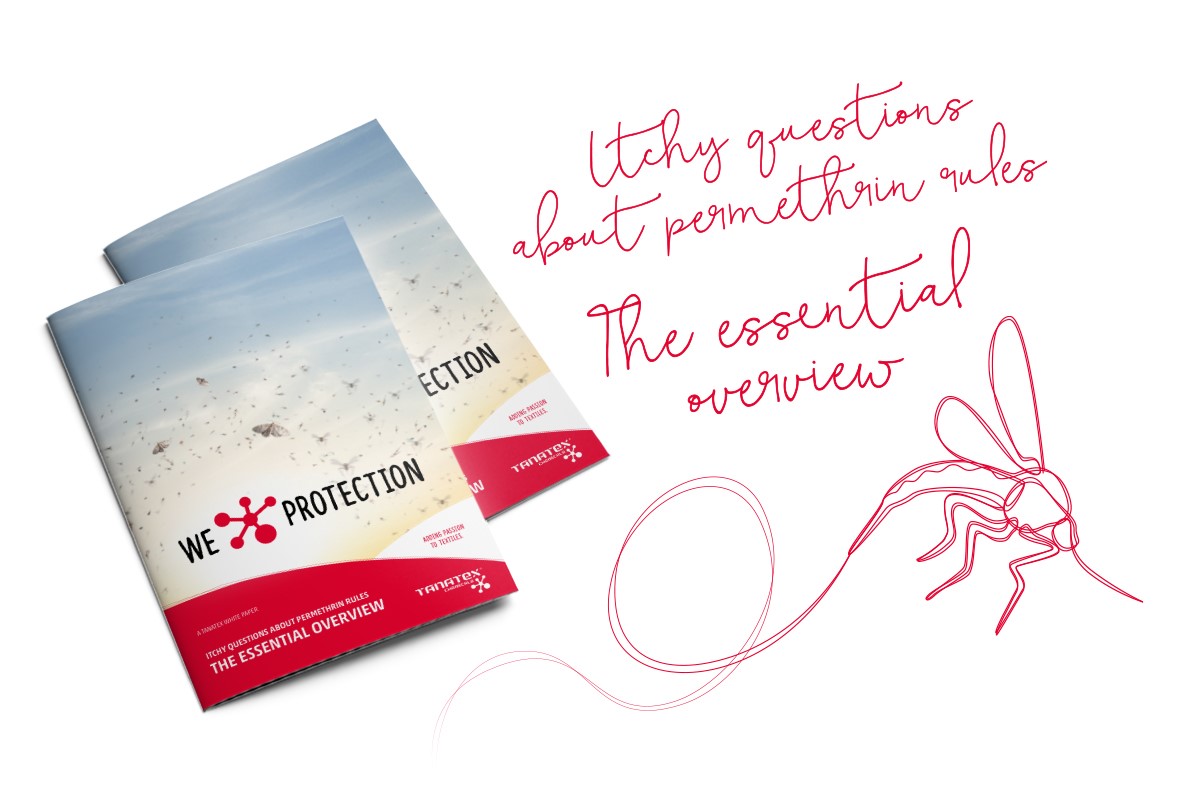 A permethrin based tick protection that ticks all the boxes

Malaria? Africa, India, and south-east Asia. Yellow fever? South America and Africa. In Europe and North-America, insect-borne diseases seem far away. Western mosquitoes are just plain annoying, but do not transmit dangerous diseases. But what about that little, black insect that wanders through our forests looking for warm blooded creatures? Ticks transmit Lyme disease, an […]

Mothproofing your textiles: 2 do’s and don’ts

So, you work in the woolen textile industry. You are hailed for your quality products. Your clothes and carpets are high-end, and your customers expect the very best. There is just one small problem. Wherever you go, moth larvae try to sabotage your success. They turn up out of the blue and eat holes in […]

Permethrin is a hot topic. To date, no insect proof agent is found more effective in protecting us against mosquitoes, ticks, or flies. As it attacks the nerve system of insects, it either drives them away or paralyses them as soon as they touch the permethrin impregnated textile. Soldiers, active travellers and outdoor enthusiasts are […]