Revealing the magic ingredient for growth

Revealing the magic ingredient for growth

Lothar Hentz, Area Sales Manager for TANATEX across Nordic and German-speaking countries in Europe, discusses value, sustainability and his magic ingredient for growth.

You can’t miss the pleasure Lothar Hentz gets from his job. It’s covered in a favourite memory of his: “It was my first day at TANATEX and I still remember having a strong sense that I’d made the right decision. Everything about the company gave me the impression of being home. That feeling remains just the same today.”

Lothar joined TANATEX two years ago and has brought a new focus across his sales area. He describes it as a move from selling products to selling value. For example: “One of our customers is a very successful producer of shirting fabric. They had been worried about the Asian competition. To explore new possibilities, we organised a workshop with the company’s entire technical team. We demonstrated a number of functional innovations for their end-use fabric. Then we offered the company a two-year exclusivity deal with our specialist technology. Our innovation, in combination with that exclusivity, will make a real difference to our customer’s future, not just for two years, but much further ahead.”

The example shows how adding value to customers changes a straight forward supplier relationship into one more closely resembling a strategic partnership. Lothar clearly relishes the success his approach is delivering: “For me, this is the magic ingredient and is allowing us to predict substantial organic growth from our customer base next year.”

Lothar’s career tells the story of the European textile industry over the past 40 years. He started when mass production was in its heyday in a company which produced more than 600,000 running metres every day. Production on that scale is non-existent in Europe today.

At that time, in Germany alone, the textile industry employed more than 1 million people. Today it’s less than 100,000. However, he adds: “What’s really interesting is that across the countries in my sales area, turnover in the textile industry is more or less the same as it was 40 years ago.”

He continues: “For me, that’s the real story. The companies which identified what was happening and started to switch from classical textiles to specialty textiles (including technical, home and furnishing textiles) are much more efficient and profitable than those mass production houses of 40 years ago.”

He’s proud to have been part of the technical textile development from its beginnings in the early 1990s: “Few people believed in it then, but now 80% of the European industry is based on technical textiles. We’re lucky in TANATEX because the company understood that development at an early stage and began to develop a very ambitious product portfolio.”

There’s something that produces an even stronger sense of pride. In 2008, Lothar had an idea for creating a material to clean up oils spills. The material, Oilguard, was developed and launched by a company he founded. “Do you remember the tremendous environmental threat in the Gulf of Mexico when the oil platform exploded?” he asks. “Well Oilguard was used in the clear-up and helped to avoid the worst of the devastation. That was my baby and it won several innovation and industrial prizes!”

Now Lothar has a new dream.“It’s for TANATEX to succeed in creating products from naturally organic, sustainable sources which are both powerful and affordable. The cosmetics industry is already showing us it’s possible to move from mineral oil-based components. Therefore, I know that this dream too will become a reality in time.” 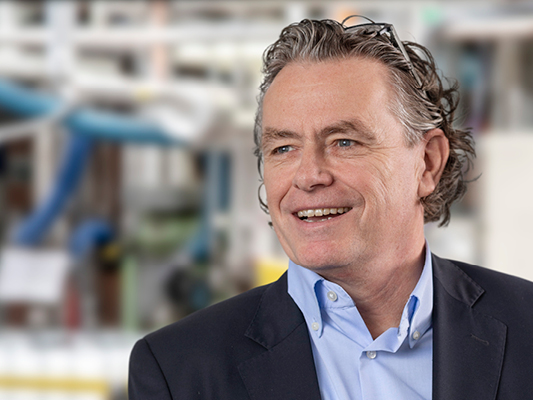