Let’s get used to life in the fast lane

Let’s get used to life in the fast lane

After more than 25 years in Asia, Simon Collinson is returning to Europe, responsible for Sales and Marketing in Europe & Americas region at TANATEX. He describes the thrill of working in fast-growing markets. As well as why he wants to bring the dynamism of Asian business culture with him.

Simon Collinson qualified as a chartered colourist in the United Kingdom in 1986. Since then he spent almost his whole career in Asia. He hadn’t planned it that way. He first went to Asia on a 12-month secondment to Indonesia with ICI in 1992, fully expecting to return after that year. However, he then took on roles in Taiwan, Hong Kong and Malaysia, before moving to China, which has been his base for the past 19 years. “Asia was where all the investment was going at the time and I wanted to experience that,” he explains. “Once you get into the environment, you get hooked. This is partly due to the pace of life and also because of the business opportunities.”

Simon moved from technical roles into management and then general management. Today he considers his role to be primarily about people and much prefers being out meeting customers and partners than sitting behind a desk. He takes pride in seeing people he has brought into the company at a relatively junior level grow into senior positions. “This is very rewarding to me. It is also one of the benefits of working in such a dynamic area of the world,” he adds.

His proudest moments – outside of his family – include building up a new legal entity in China which turned a profit within 18 months. More recently, the team effort involved in bringing the new TANATEX factory in Thailand on stream and sees its five-year anniversary in October. Day to day, he takes great pleasure from his team winning a new account or stealing a march on a competitor in the challenging Asian marketplace.

Over the course of his career, Simon moved from ICI to Zeneca and later to DyStar as companies consolidated. He took on the role of TANATEX Regional General Manager, Asia-Pacific in 2013, attracted by the chance to operate and act more quickly, without the constraints of big-company bureaucracy.

He therefore brings considerable knowledge of how TANATEX works to his new role. However it’s not just this experience which will prove useful. He explains: “The thousands of hours I’ve spent with customers and my deep involvement at the technical end will really help. I have a good insight into what customers need and also how our main competitors operate in the market.”

Simon feels honoured to have been a part of the phenomenal development that has been under way in Asia. He wants to bring some of this fast-paced culture back with him. In addition, he recognises the opportunities Transfar offers TANATEX. He sees a key part of his role as being to enhance communication and cooperation between the two companies. “China has developed tremendously in the past years. There are high levels of skill sets in the Chinese market,” he says. “Transfar are giving us lots of scope to operate as we did before while providing support as necessary, which is very positive. We need to use the support and leverage synergies between our organisations.”

After so many years in Asia, he barely notices cultural differences. Furthermore, he considers that business cultures are generally becoming more homogeneous. This is partly the result of the internet but also because the new generation of business leaders have largely been educated in the West. Among customers, he increasingly sees managers whose thinking and practice has been influenced by exposure to western business culture. This is very different to that of the previous generation.

We need to be hunters, not farmers

Simon is relocating to the Netherlands for his new role and looking forward to the challenges and experiences it will bring, while happy that he is leaving the APAC operations in strong hands. He’s interested to expand his regional insight into a global perspective. True to his passion for dynamism and competitive success, he wants to develop the hunting mentality further across the organisation.

“As a company we have a real potential for global growth. I want us to identify the steps we need to take to realise that growth, while removing any blocks to progress,” he says. “To that end, I hope we can all come together in our commitment to our vision, united within a mindset of ‘customer first’. And finally, let’s develop the dynamism and pace that makes for a genuinely exciting and rewarding environment.” 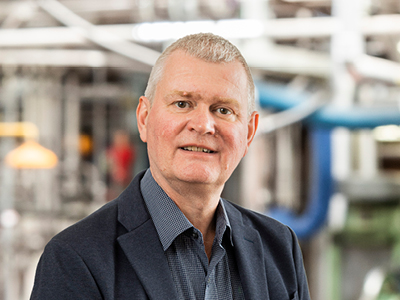