Innovation powers success in Japan – so let’s have more!

Innovation powers success in Japan – so let’s have more!

Delighted with TANATEX blockbuster TASTEX®, Yasuhiro Matsuura, Representative Director of TANATEX Japan, is keen to see the next pioneering breakthrough.

Product innovation is a key ingredient in the success of TANATEX in Japan, according to Representative Director, Yasuhiro Matsuura. That’s why his favourite product range is the TASTEX® Durable Cosmetic Finishes for textiles. These provide skin sensations from warmth to cooling, calming to refreshing.

Yasuhiro loves these products because they’re great for the wearer, made in Japan and bring value to the company. “I was told by my predecessor that we could achieve our targets every year as a result of strong sales of TASTEX® as we are a pioneer in these cosmetic, cool and warm finishes,” he explains. “Now I’d like us to develop another blockbuster product that is just as pioneering and just as successful. That’s my aim over the next five years.”

From noisy teletypewriters to super-connectivity

Yasuhiro started his career at Bayer as he wanted to work in a foreign company. Initially in the paper unit, he spent nearly two years based in Germany. He later returned to Tokyo in a sales role for inorganic pigments. He became representative director for TANATEX Japan in 2014, responsible for all the business activities from sales and marketing to back office functions. This breadth of responsibility is one of the things he enjoys most about his work. In the big company environment of Bayer and Lanxess, functions like finance and accounting and human resources were independent from the sales unit. Now he enjoys overseeing all these functions in his role.

Much has changed over the course of his career, not least the way business is conducted. He remembers there being a single desktop computer in the office when he started. Communications were sent by Telex – a network of very noisy teletypewriters – as even fax machines were uncommon. One thing he misses in today’s super-connected world however, is his need to travel to the European headquarters. He wishes he could make the trip to the Netherlands more often.

Take pride in our relevance for people’s comfort and convenience

Some things haven’t changed. He’s proud to have worked for the same company throughout his career (albeit with changes in name and ownership). In addition, many of his customers have remained constant. “If I look at our current dealers and existing products, not much has changed in that sense, since I was a freshman. For example, the sales representatives of the dealers are still there, but now as the manager or director of the same company. And my products, that have developed over the years, are still relevant and alive for the same customers.”

After 30 years in the company, is there anything he’d change? “If we were based in Tokyo, that would be nice as my family are there!”

He ends with a final message for everyone in TANATEX: “Clothing, food and housing are three important elements in every human’s life. We should all take pride in the fact that we are involved so closely with one of these elements as a supplier. We should continue to contribute to a healthy and happy life for all on earth.” 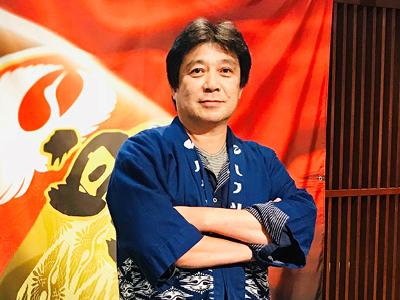