Michael Pirkotsch, Business Development Manager at TANATEX, is a real chemistry ambassador who has seen a lot of the world. His 40 year-career in chemical textiles is filled with cultural changes, technological developments and good stories.

Michael Pirkotsch clearly incorporates the TANATEX mindset as a true chemistry ambassador: hardworking, enthusiastic about science but ever modest. During the interview, Michael draws a vivid picture of a textile professional that favours passion over status and cannot be impressed by cultural differences. It’s this world view that has shaped his career and made it so easy to work abroad. But where did it all begin? How did the chemical textiles industry change over time? And how did Michael deal with the changes in Bayer and TANATEX? “I wanted to be part of their transformation; they were so innovative and that suited me,” he says.

Michael didn’t start off as the Global Business Development Manager he is today. Forty years ago, he stepped into the Bayer lab as a 15-year old, to work on a school project. “I’ve been interested in science since I can remember,” Michael says. “I was an outdoor boy, always climbing and hiking. And I was fascinated by chemistry, because of the chemical reactions and explosions.” His penchant for chemistry and science was quickly spotted, and Michael was hired by Bayer as a chemical lab assistant.

“The chemical industry used to be very different,” Michael remembers. “People smoked in the laboratory in the 70s!” Rules and procedures didn’t rule the lab and the most important safety rule was common sense. Although he’s safety-conscious, Michael still supports this way of thinking. “Before anything else, you have to understand chemistry to be able to work with it,” he explains. “Admittedly, safety was less regulated back then, so we were all taught to be aware of the dangers ourselves. This freedom kept the creative juices flowing and it really helped us in the development of innovative products.” Michael feels that we might have become too strict in today’s labs. “Which is weird, as household chemistry is way more dangerous!”, he says laughing.

The road to textiles and TANATEX

Michael’s career is shaped by a series of choices. After spending five years in the chemical lab, he started at the real research department, where he really started working with chemical reactions. He then switched to the R&D department, where he focused on textiles, pre-treatment in particular. Here, he worked on the invention of products such as scouring and wetting agents. A textile chemist was born. In 2004, Michael had to decide to stay at Bayer or switch to TANATEX. He chose to take control over his career and joined TANATEX. Michael explains: “I wanted to be part of their transformation; they were so innovative and that suited me”.

In Asia, you need to be highly flexible and self-starting. Do things don’t go as planned? Deal with it. Do you want to get something done? Do it.”

In 2009, Michael’s job brought him to the other side of the world. He was asked to go to Shanghai as a technical sales developer for a pre-treatment/OBA project. TANATEX wanted to improve business in China and needed someone to guide the process on premise. Excited? “Of course.” Scared? “Not at all.” When asked why not, Michael explains: “I was self-motivated. I really wanted to go. I’d never go abroad to climb the career ladder, it doesn’t work that way.” Michael chose to go for the experience only. He didn’t have a hard time adjusting to the Chinese culture, he says. “The trick lies in taking things as they come,” is his simple explanation. “In Asia, you need to be highly flexible and self-starting. Do things don’t go as planned? Deal with it. Do you want to get something done? Just do it.”

It’s this attitude of flexibility and self-motivation that made it so easy for Michael to switch countries. He also lived in Thailand for three years, where he helped start up the new TANATEX plant. “Those were exciting times!” he recalls. “There, I joined the traditional Thai ceremonies from the first start, together with people from the local community, which was really special.”

Despite of the many national differences, Asian countries do have similar ways of doing business, and it’s of a different kind to Europe. “You have to build a relationship first”, Michael explains. “It’s not that Asian people don’t like companies from abroad, they even like European businesses for their high-quality standards. But they’ll always need you to be a trusted partner first. At the time, most Asian people didn’t speak English. We needed translators, and real good ones too, and ones you can trust. In the end it’s really not that different from doing business in Europe.”

After so many years of travelling and changing countries, Michael now works from the TANATEX head office in the Netherlands as a true chemistry ambassador. It’s a welcome change, he says. “The air is cleaner, and it’s quieter than a 24-million city such as Shanghai.” He’s not done with Asia, though. Michael now uses his international experience to support his colleagues in their communication with Asian clients. “In China, you get one shot. They don’t believe in promises and you have to deliver”, he says. “I’m glad that I can use the experience I gained during my work abroad to help TANATEX getting a foothold in the Asian market.”

Apart from building cultural bridges, Michael also has another mission, which is the mentoring of young chemists. “I remember that in the end of the 90s, almost an entire business unit was retiring and all of their experience and knowledge with them, which was disastrous!” Michael recalls. Today, history seems to repeat itself. “Young chemists are highly needed and they’re scarcer than ever”, Michael says. “The textile industry is changing fast, so we need people that can keep up with today’s development pace.” He explains that today, availability is a plant’s most important challenge, which is why they work with several suppliers to keep everything up and running. “We therefore shouldn’t aim to be the only supplier; we should aim to become the very best there is.” When asked how, Michael doesn’t have to think long: “Before anything else, we need new people and teach them solid chemistry.” 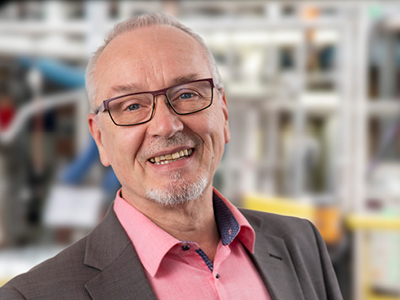